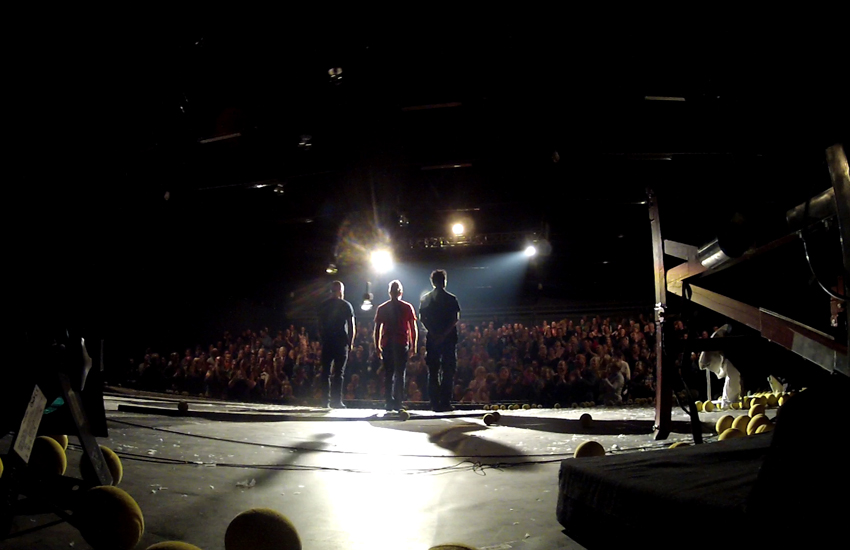 The spring tour had its final with three performances in Hangaren Subtopia, just outside Stockholm. Filled to the rim with extra chairs put in and standing ovations every night.

As if that was not enough we just just got the report on what people thought of the performance in the questionnaire they fill out on their way out of the theatre. All top ratings! One 4 out of 5, and the other 99% gave the performance 5 out of 5. That must be some kind of statistical record?! With such a radically different and anarchistic performance that GLITCH really is we were surprised to receive such a massive unison YES from such a mixed audience. (Perhaps it IS possible to win them all….?!) We are deeply grateful and happy that people open up and take in the performance like they do, that they laugh and cry and lose themselves into our world. It is an overwhelming feeling to see three years of preparations and experimenting land this well!

A few excerpts from the audience questionnaires:
“Best in the world!”
“Genius”
“I want to see it again!”
“Super!”
“I am touched! <3”
“Fantastic”
“It was like a movie, this should be filmed!”
“So entertaining!”
“Unbelievable!!! <3”
“Fantastic, the best I have ever seen in my whole life! Thank you”

GLITCH is now back in the storage room and it is time to find economical support and theaters for future touring – not the easiest task for a small producer with a big vision..! Once again seeing that the audience IS ready and proving once more that it IS possible to blend fine arts and pure entertainment into one makes us want to pursue making this dream a reality. Join the revolution!